When implementing WebP on a website, the main problem is to provide support for browsers that do not support it. I will show you how to quickly and sensibly add WebP support on the webserver level (NGINX and Apache) without any modification of the front- and back-end code which, depending of its complexity, could be very time-consuming.

In December 2019, as we can see at caniuse.com, many browsers still do not support WebP format (including all versions of Internet Explorer and Safari):

For this reason, we need to make sure that WebP images are only sent to browsers that support it and we will achieve this at the webserver level.

On a Debian/Ubuntu system execute the following command:

You can also download the libwebp-1.0.3.tar.gz package from here and compile it from sources:

This will install cwebp which will allow you to convert graphic files.

On a typical website, new graphics are constantly arriving (uploaded by CMS, automatically generated thumbnails, etc.), so it would be wise to prepare a bash script, that will be executed by the cron daemon and will recursively search and convert all newly created .jpg/.jpeg/.png files to .webp in all subdirectories and place them next to the original ones.

Create a file called convert_to_webp.sh with the following content:

Adjust the path /var/www/example.com/public/ to point to the directory, where the files to be converted are located, then give the script execution rights:

If everything was done correctly and there were files to convert in the directory, you will see a similar result:

Now the WebP equivalents of the original files are saved next to them. It is worth mentioning, that re-running the script will not convert the same files again. So even with a large number of images you can add the script to cron to convert a new files when they appear without any fear.

To set up a cron job to run the script every 30 minutes, execute the crontab -e command and add the following line:

How to configure NGINX to serve WebP images

In the main config file (which is usually located in /etc/nginx/nginx.conf) add the following lines in the http {} section:

Then in the server {} section of your vhost add the following directive:

This will cause any browser that sends image/webp MIME type in the Accept header along with the HTTP request, to fetch the WebP version of the image if it exists.

Verify that it works

You can use Chrome DevTools for this. If everything has been done correctly, you will see the Content-Type header with the image/webp value in the "Response Headers" section: 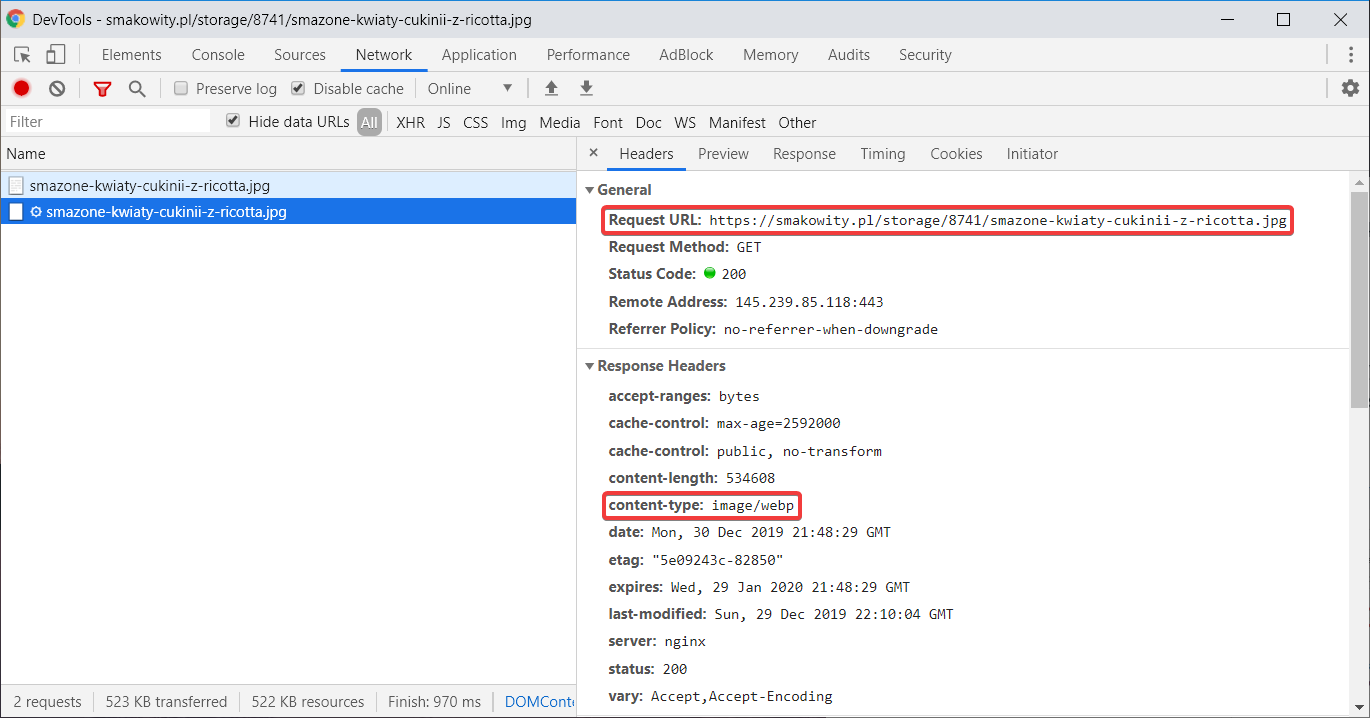 This site uses cookies to provide you a better user experience. You can block them in your web browser settings. Incredible, isn't it?